Almost exactly one year ago today I received a call from Derek Sloan.

He asked for my thoughts on him running and if we could help. I asked him what his strategy and plan was for the leadership. Without breaking confidence, he said that he was concerned that there would not be a social conservative voice running from caucus. I was blunt in my assessment of the likelihood of him winning the leadership race, but I told him that there was utility to having a vehicle for pro-life voices in the leadership race.

I ended the conversation by saying that we were always looking for more prolife voices to support in the leadership race.

Besides the interview, that was essentially the last time I heard from the Derek Sloan campaign.

Why do I say this?

I want you all to be aware that those around Derek Sloan’s campaign were (generally) not easy people to work with during the leadership race. In fact, a few of them privately confided as much in me.

Unfortunately, the attitude seemed to continue post-leadership race. It is my understanding that Derek’s team (and perhaps Derek himself) has not made many friends in caucus, either with people who are pro-life and with those that are not.

No one is perfect and no one performs their job to absolute perfection (including yours truly), so let us not be under any illusions regarding any pro-life Member of Parliament or leadership candidate.

That being said, what is happening to Derek Sloan is unconscionable.

The timing of all this is quite interesting.

It appears to me that certain forces within the party establishment are so concerned over the upcoming convention, that they are willing to eject Derek Sloan over the most spurious of charges in the hopes of angering his supporters into throwing up their hands and leaving the convention and (hopefully for them) the party.

But now is not the time to throw up your hands in the air and walk away; now is the time to grab the wheel and steer the ship.

You see, we have made incredible strides in signing up pro-lifers to attend the Conservative Party of Canada Policy Convention. These conventions happen every two years or so, and are important because they establish the official party position on policy (such as abortion and assisted suicide) and elect the National Council (who are the board of directors for the party).

At the last convention, we were 107 votes shy of eliminating the only pro-abortion policy of the party. At that convention, there were 2,700 delegates and at least 170 of them, around 6%, were RightNow supporters.

For this convention, we have significantly increased the number of RightNow supporters registered to attend by several hundred, and constitute a healthy portion of the 4,400 registrants.

However, we were not the only pro-life entity to account for a doubling of delegate registrants in the final 48 hours before the deadline; Derek Sloan played a large part in that as well.

It seems to me that certain party officials who do not share our values are concerned they will lose significant control of the party at the upcoming convention. Given the numbers we have seen and the anecdotes we are hearing, they should be more than just concerned.

When a fighter is put into a corner, how does he react?

When we were put into a corner, we fought back (re: last year’s leadership and defeating the candidate that called us a stinking albatross).

But sometimes, a fighter will go low; below the belt.

That is what is happening here.

If we were not a direct threat to those who do not share our values in the party in terms of taking our rightful and democratic place within the party policy and leadership (re: National Council), then they would not attempt such a brazen and obviously desperate effort such as this.

The Derek Sloan leadership campaign received a $131 donation from a white supremacist named “Paul Fromm”. Fromm, however, donated using an alias, and neither Sloan, nor his campaign team knew who this person is. The Conservative Party processed this donation, took their 10% cut of it, as well as mailing Fromm a ballot to vote in last year's leadership election - meaning that the Party accepted his membership.

In what seems like a plot to oust him from the party, this information was miraculously obtained by the anti-conservative online website Press Progress, who reported that O’Toole was “outraged” at the donation and was immediately initiating the process to remove Sloan from caucus.

Under the Reform Act, the Conservative caucus has adopted the provision that the leader cannot unilaterally eject a member of caucus. The caucus chair (elected by his or her colleagues) must receive written notifications from 20% of caucus to have an ejection vote. After that point in time, the ejection vote is decided by secret ballot and a simple majority of caucus is required.

The vote is, apparently, scheduled for Wednesday, January 20 so be sure to contact the Conservative Members of Parliament and let them know what you think about removing Derek Sloan from caucus: www.itstartsrightnow.ca/cpc_caucus

It should also be noted that Fromm also registered for the upcoming Conservative Party convention happening this March, which means his membership in the party must have been accepted by the party. The hypocrisy is almost at Justin Trudeau levels… 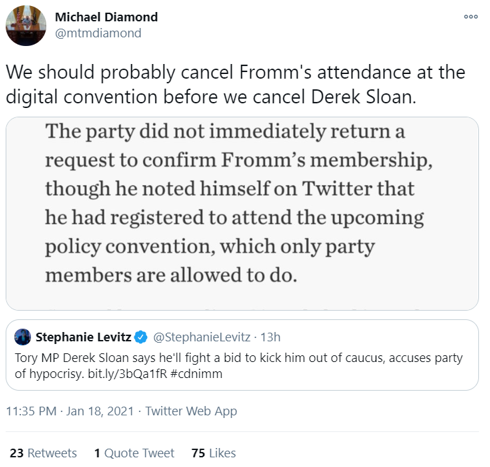 The story “broke” around 4:00pm EST on Monday, January 18 and the leader issued a statement two hours later. It is my understanding that Derek had just finished supper with his young, multi-racial family and checked his phone to see that he was being expelled from caucus; he was not even given a chance to denounce the donor and ask the party to return the funds.

So, where do we go from here?

Spurious and desperate attempts such as these are an unfortunate badge of honour when we are advancing in a major political party. There will be more casualties along the way, to be sure, as the old guard establishment elites within the party who do not share the values of the party membership, volunteers, and donors (as evidenced by the most recent leadership race) begin to see their control over the party through nominations, leadership races, and party policy conventions slip away.

If the current leader and leadership team within the party are not careful, they will quickly realize that the Conservative Party of Canada does not own pro-lifers, who constitute a significant portion of the party’s voting coalition that is mathematically irreplaceable.

Our response as a movement must be to lean in, not back away.

I propose that those who have read this far do the following:

But above all friends, do not lose heart and do not disengage. Those who do not share our values want us to leave the political sphere and the expulsion of Derek Sloan is designed for you to do just that; don’t take the bait!