“If you can accept losing, you can’t win.”

When I was 13, I saw an image of an aborted fetus that made me sick. I was going intoGrade nine in the fall and had a concept of what abortion was, but had no clue it looked like that. I’ve encountered so many people who ferociously hate the images and I can safely say I hate them too. I hate that a life-ending procedure so gruesome was forced onto such an incredibly small baby.

Love ‘em or hate ‘em, that’s what personally got me involved in the pro- life movement. Now I don’t know if any of you reading this have ever done any type of pro-life activism, but here’s my general synopsis of what you go through when you do: First, it’s stressful and scary. You know you should probably do it, but you don’t really want to. You’re rusty, and let’s be honest, what if someone you know sees you!? Then, about halfway through, it becomes empowering. You start feeling like a true human-rights warrior, Martin Luther King style. When it’s over, you feel like you’ve done your part for mankind. You can leave holding your head high because you did what not too many people agree to do. Who knows whose life you changed (or even saved). It’s a good feeling. Whether it’s the Life Chain, your 40 Days for Life shift, or road tripping to the March for Life, I’ve personally experienced all of these emotions while witnessing to the public. 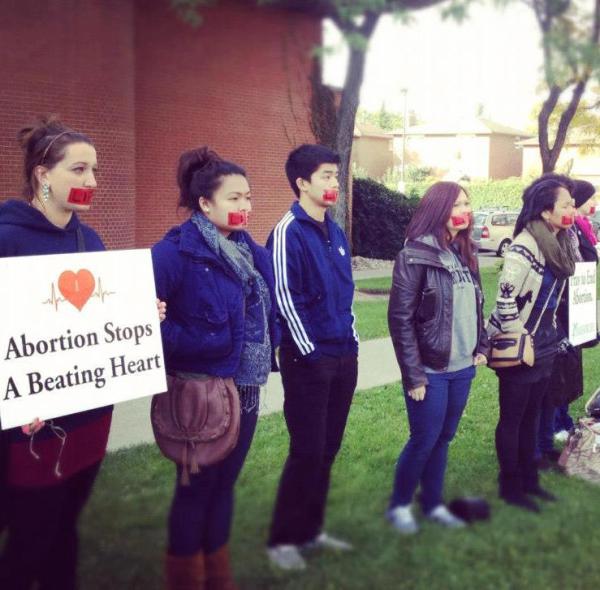 But then we go back to reality. Our jobs, our families and our social lives carry on, while we continue to live in a country that legally permits what you just protested. I’ve talked to men and women in their 70’s and 80’s who have spent a good portion of their lives protesting abortion; who’ve gotten arrested in peaceful sit-ins and passed on that pro- life vigor to their grandchildren, but are still forced to live in a country where their elected officials continue to ignore them.

It gets to a certain point when you start thinking, what’s the point? Why even bother? It seems like everything we do isn’t working and decades later abortion is still decriminalized. Not one piece of pro-life legislation has passed in 47 years.

Anyone with a television or computer knows the success our American neighbours have had in the last decade, passing pro-life bills left right and center. Not even a month ago, Mississippi passed a bill to ban “dismemberment abortions” in the House of Representatives, which basically criminalizes abortion after 12 weeks. West Virginia doctors face a $10,000 fine and TWO YEARS in prison if they commit the procedure. Yet here we are, in a political wasteland, where we can’t even get a motion that says female gendercide is bad, to pass in the House of Commons.

The way I see it, we really have two options: we can either continue to do things the way we’ve always done, with no political success and be content with another 47 years of abortion-on- demand, or, we can start changing our ways. We can stop being reactive and start being proactive. We can start engaging in campaigns that maximize the effectiveness of our time, treasure and talent. We can stop losing and start winning.

But how? It all sounds nice and fancy, but it’s just words. What gives me, The Glob (as abortion advocates like to call me), the right to say that I have the “special sauce” that will move the political yardstick forward? 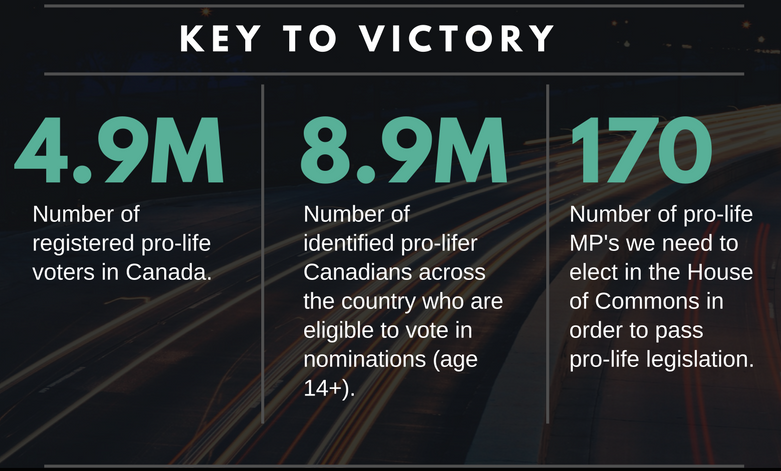 I’ll admit, I’m no psychic, but I have done the math. Pro-life politicians equals pro-life legislation. We can’t expect politicians to be magically pro-life if we aren’t involved in electing them. We also can’t expect pro-life legislation to pass when only 40 of the 338 MP’s elected in the House of Commons are pro-life. That’s not even close to half. Now, I know what you’re going to say. There are not enough pro-life Canadians, so we need to change the public first, before we can change anything politically. Well, the numbers say otherwise. According to a recent Environics poll, there are 8.9 million pro-life Canadians over the age of 14. There are 6.8 million registered pro-life voters, which means, in a mathematical nutshell, there are definitely enough pro-lifers that already exist to make a difference politically.

Think about it this way. In 2015, a pro-life candidate lost a nomination in my hometown by sixteen votes. In my family alone, there are eight people over the age of 14 eligible to vote in a nomination, which means there were eight votes to give the candidate with just one family. Therefore, it would only take two ginormous families like mine (or three or four regular size families) to make the difference in electing a pro-life candidate. And in ridings like mine, if you win the Conservative nomination, you win the election. I wish I could say this was an isolated instance, but this type of thing happens all the time. Why? Because the majority of pro-lifers are not politically active. 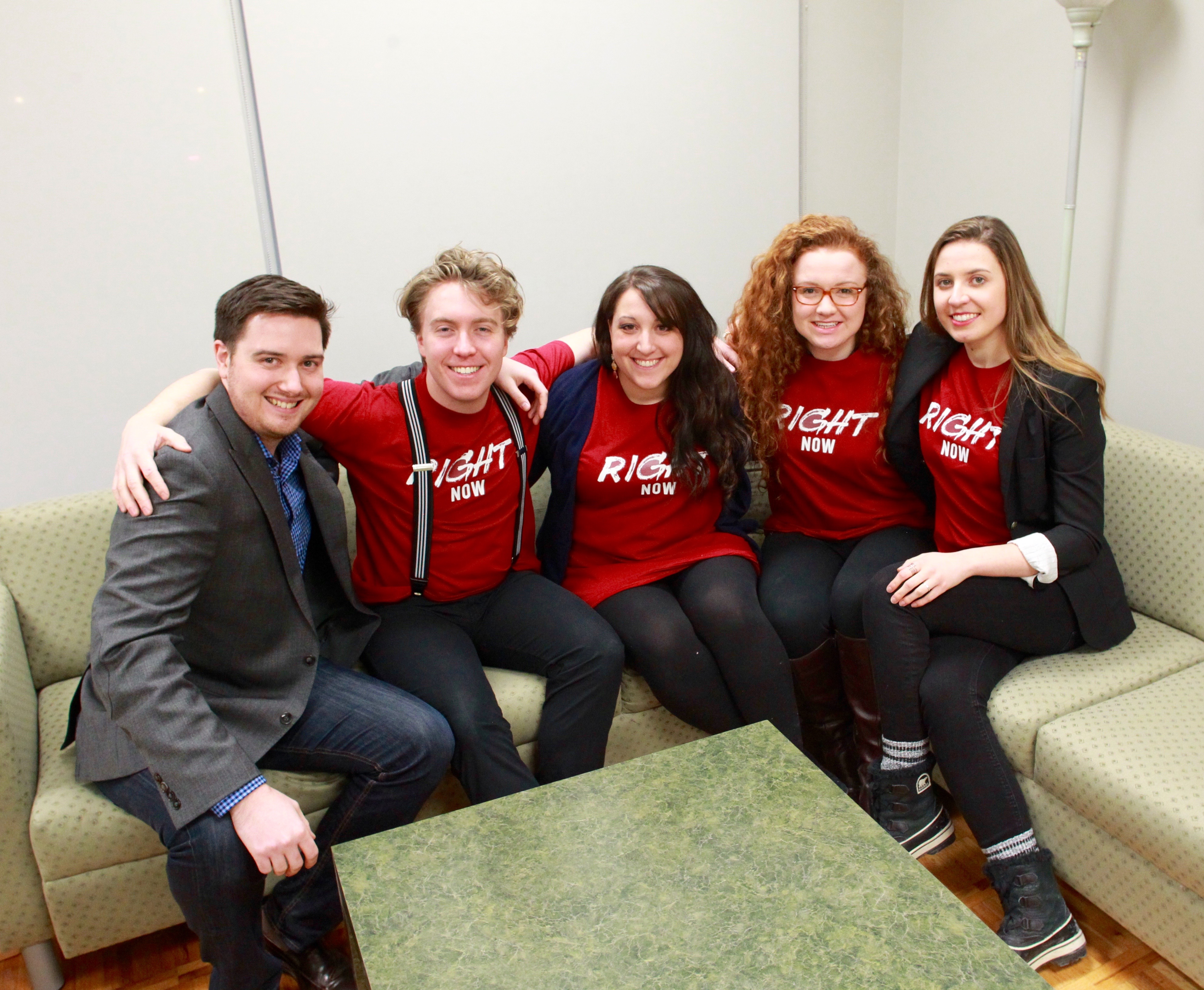 People ask me why Scott and I started RightNow, and that’s the answer. We’re sick of losing. We CAN win, and sooner than you think. But it’s not going to happen without pro-lifers being politically active, even on a small scale (ie: voting). RightNow exists to help guide pro-lifers to win nominations. To win elections. To build pro-life, political capital. And above all, to pass pro-life legislation both provincially and federally. We have organizations lobbying. We have others changing hearts and minds. Let’s start taking advantage of the activism already happening, and start winning elections. There’s no other organization in Canada working full-time to do this, which is why I truly believe we haven’t been winning. Let’s change that, and let’s start right now.