OTTAWA, ON (March 10, 2020) – Political pro-life organization RightNow has reveled the recommended ranked ballot for pro-life members of the Conservative Party of Canada to guide them in their voting decisions for the upcoming leadership race.

“Our recommended ranked ballot is based upon three criteria: past voting records, winnability, and each candidate's plans for future pro-life policies, which is derived from an interview we do with each candidate,’” said Alissa Golob, Co-Founder and Executive Director of RightNow.

“We want to highlight where the leadership candidates stand on our pro-life issues, where they stand on the numerous pro-life policies that are already in the party's official policy declaration, and how they plan to retain and grow pro-life support for the Conservative Party of Canada” said Golob.

In May 2017, Andrew Scheer was elected leader of the Conservative Party of Canada, with significant help from pro-lifers. Despite winning the popular vote, increasing the number of seats for his caucus in the House of Commons, and reducing the Liberal government from a majority to minority, Andrew Scheer offered his resignation as leader of the party in December 2019 after pressure from conservative media pundits. The Conservative Party of Canada is now holding a leadership race to replace Andrew Scheer with the new leader to be chosen on June 27, 2020.

“Our organization reached out to all eight approved and verified candidates to do our leadership interview,” said Scott Hayward, Co-Founder and President of RightNow. “We were able to go through the interview process with six of those candidates. We are pleased to release our recommended ranked ballot for pro-life members of the party and we will now engage in a membership sales campaign for those pro-life leadership candidates.”

RightNow will be encouraging the tens of thousands of supporters in their database to purchase a membership to the Conservative Party of Canada by April 17 in order to be eligible to vote for the pro-life leadership candidates. 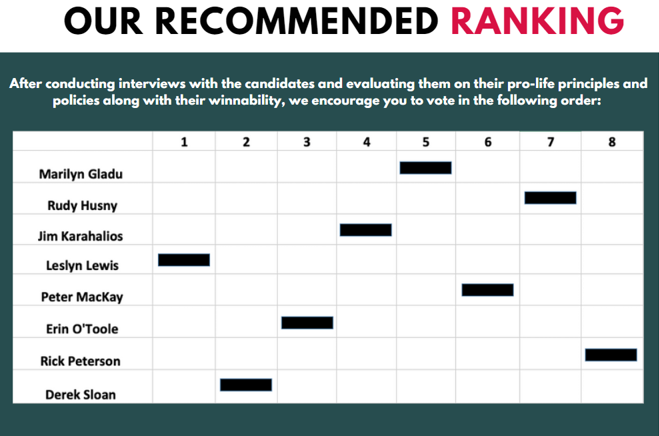 RightNow is a not-for-profit organization committed to nominating and electing pro-life candidates along with educating and engaging pro-life Canadians on the political process. Regardless of faith, politics, or background, RightNow works with people across the country to stand up for human rights for all human beings.