Home > Blog > The path to victory

The path to victory
BY SCOTT HAYWARD

They say a week is an eternity in politics and in many ways the last 30 weeks since the official launch of the current Conservative Party of Canada leadership race on January 13, 2020 has felt like 30 eternities. There have been railroad-blocking protests, a global pandemic, a worldwide lockdown, massive ideologically-driven riots in the United States, a prime minister and government on the brink of a larger-than-SNC-Lavalin scandal, and don’t forget those pesky murder hornets. This has been the constant backdrop of the current leadership race and to say the race is not in a place where the politicos predicted it would be 30 weeks ago most definitely drives home the aforementioned adage.

But what does the leadership race look like? Who is leading and who is losing? Who is likely to win? And why? And how?

How does the leadership race work?

Unlike a general election or a by-election, the electorate for a leadership race is restricted to only members of a political party by a certain deadline. In the case of this leadership race, one needed to be a member of the Conservative Party of Canada by May 15, 2020 to receive a leadership ballot. More than over 100,000 new memberships were sold throughout the course of the campaign, bringing the total eligible voting membership to over 269,000 across Canada.

The way a candidate wins the leadership of the Conservative Party of Canada is through a single-transferable vote ballot on a riding points system. Sounds simple, right? Don’t worry, here is a quick review:

Each of the 338 ridings across Canada is allocated 100 points, which are distributed based off how the members in that riding voted. To win, a candidate must receive at least 50% + 1 of all eligible points. 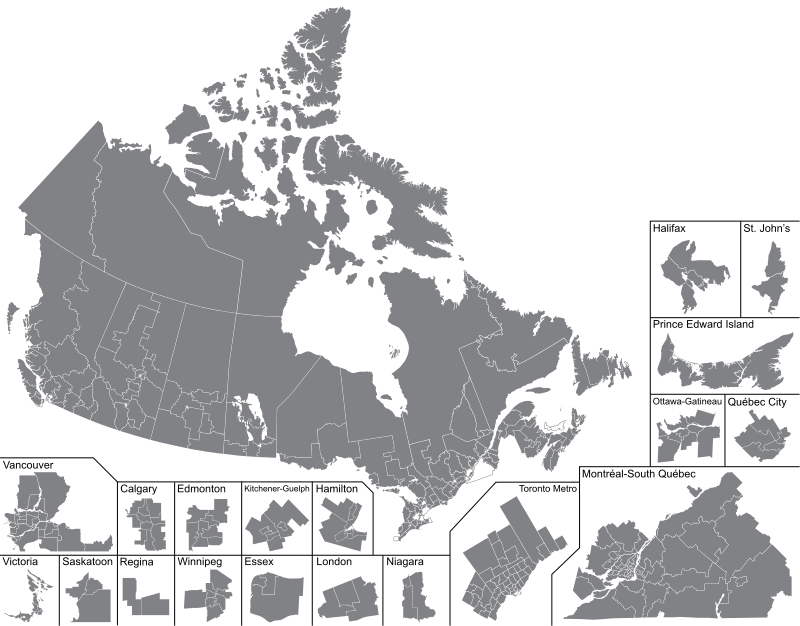 If no one has received 50% +1  of the points across the country, then the candidate who received the least amount of points drops off and the votes of the members who ranked him or her first are redistributed to their second choice candidates.

So, for example let us assume there are 500 members of the Conservative Party of Canada who cast their ballot in the riding of Fundy Royal. In this example, the voting results are as follows:

The 100 points would be allocated as such:

Let us assume that after counting all the first-place votes and points in all 338 ridings across Canada, the point total is as follows:

Since no one received 16,901 points and that Erin O'Toole had the least amount of points in this example, all of the people who place him first on their ballot and place one of the three remaining candidates in second place will have their vote transfer to the second place person of their choice.

Let us assume that after the redistribution of O'Toole’s points in each riding, the total point allocation is as follows:

Since no one received 16,901 points and Derek Sloan had the least amount of points in this example, all of the people who place him first on their ballot and placed one of the three remaining candidates in second place will have their vote transfer to the second place person of their choice and the process repeats until someone wins 50% + 1 of the points.

How does our model work?

RightNow has reviewed the second quarter (Q2 – April 1, 2020—June 30, 2020) fundraising data for the leadership campaigns released by Elections Canada on July 31, 2020. At this point in the campaign, most donors are likely to be eligible party members (though, this is not a universal truth). As such, their donor behaviour is indicative (if not predictive) of voter behaviour for the leadership race. We did not include Q1 donor data as there will likely be a higher proportion of those donors who are not members and some data points in that particular set will be over six months and thus less indicative of voting results.

Poring through the tens of thousands of names of each individual donor, RightNow was able to reduce duplicate donors. By this we mean, if Person A donated $50 to the Leslyn Lewis campaign and another $100 to the same campaign in the same quarter, they cannot vote for that candidate twice and thus all those donations were reduced to one.

By reducing the thousands of duplications and keeping track of how second ballots would be allocated, RightNow was able to compile a predictive ballot based upon donor data. Utilizing this methodology, the breakdown of unique donors (reduced for duplications) by each province and territory in 2020 Q2 was as follows: 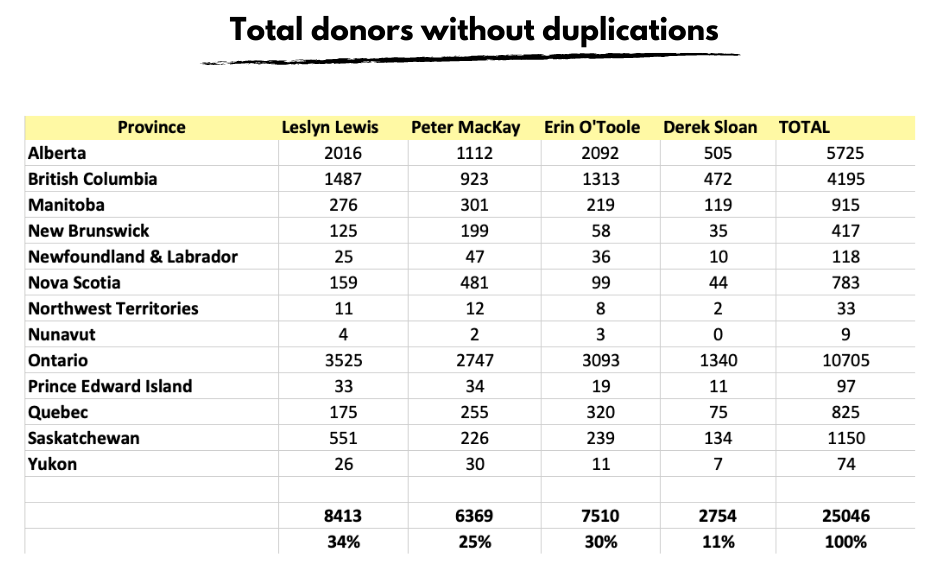 What is the model's prediction?

Doing this for every province and territory, according to the reduced duplication unique donor data provided publicly by Elections Canada for 2020 Q2 and treating each unique donor as an individual voter, the first ballot would look like the following: 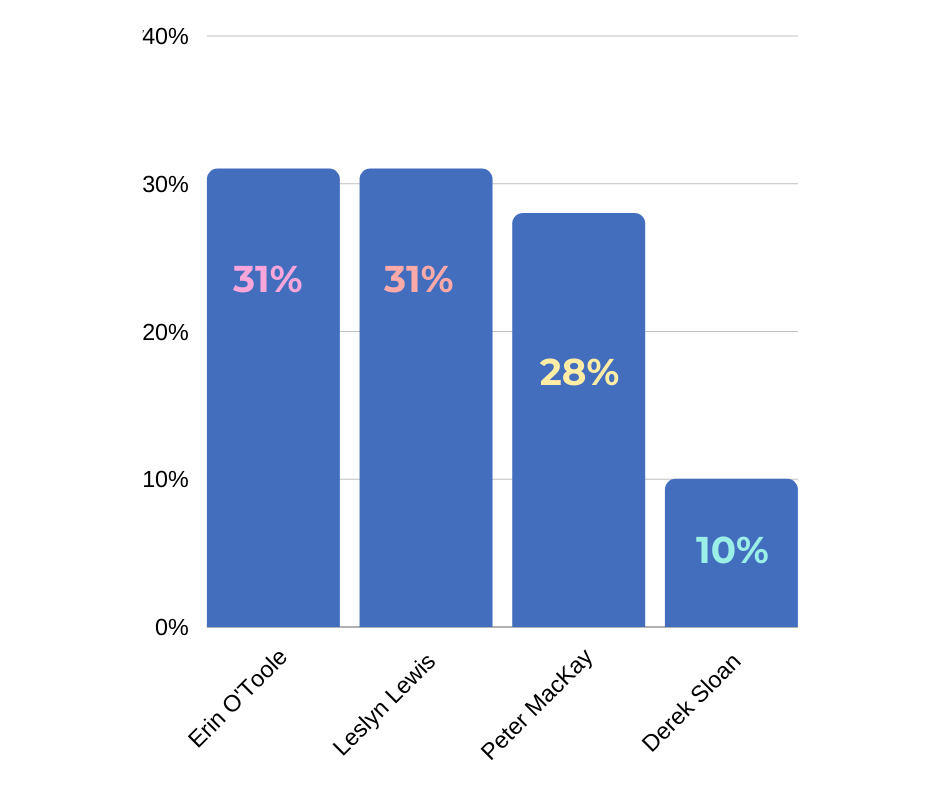 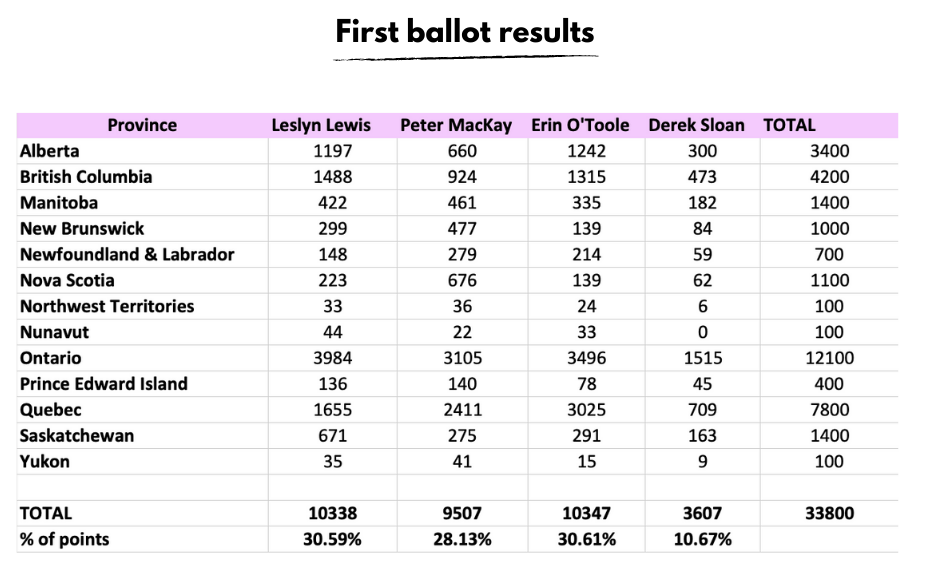 As you can see, according to the donor data distributed for points in each province, there is a very close three-way race amongst the party membership. In this model, Derek Sloan would drop off the first ballot and his points would be redistributed to the other candidates. Utilizing the donor data, Sloan’s second place votes would be distributed as follows: 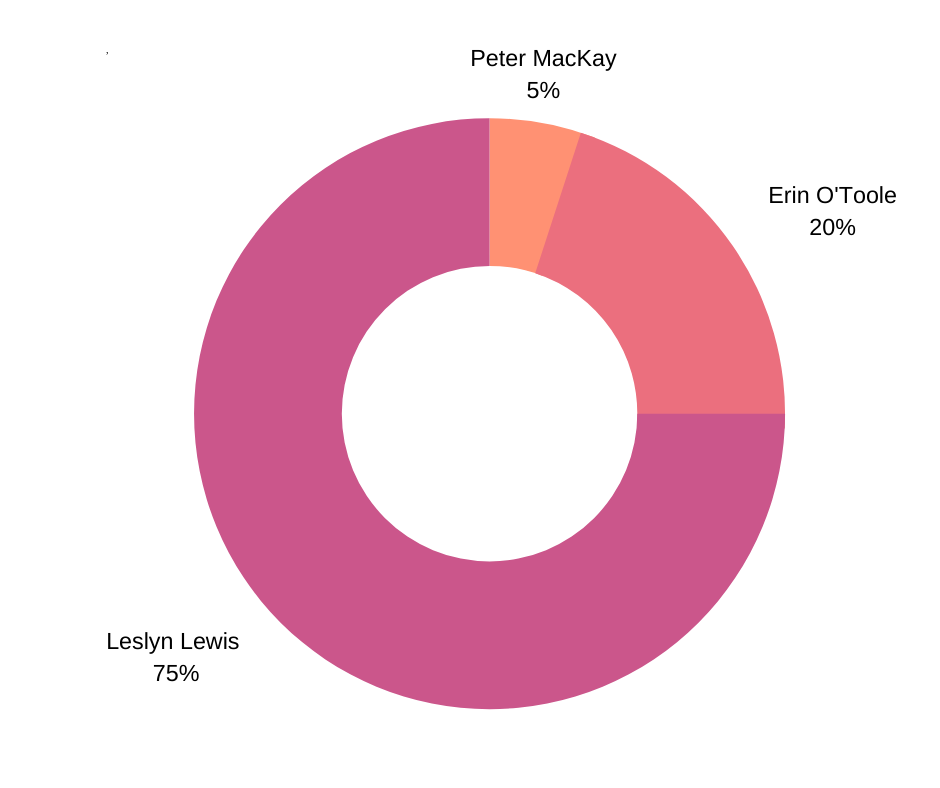 Redistributing the second place points for Sloan in each province and territory, the second ballot would look like the following: 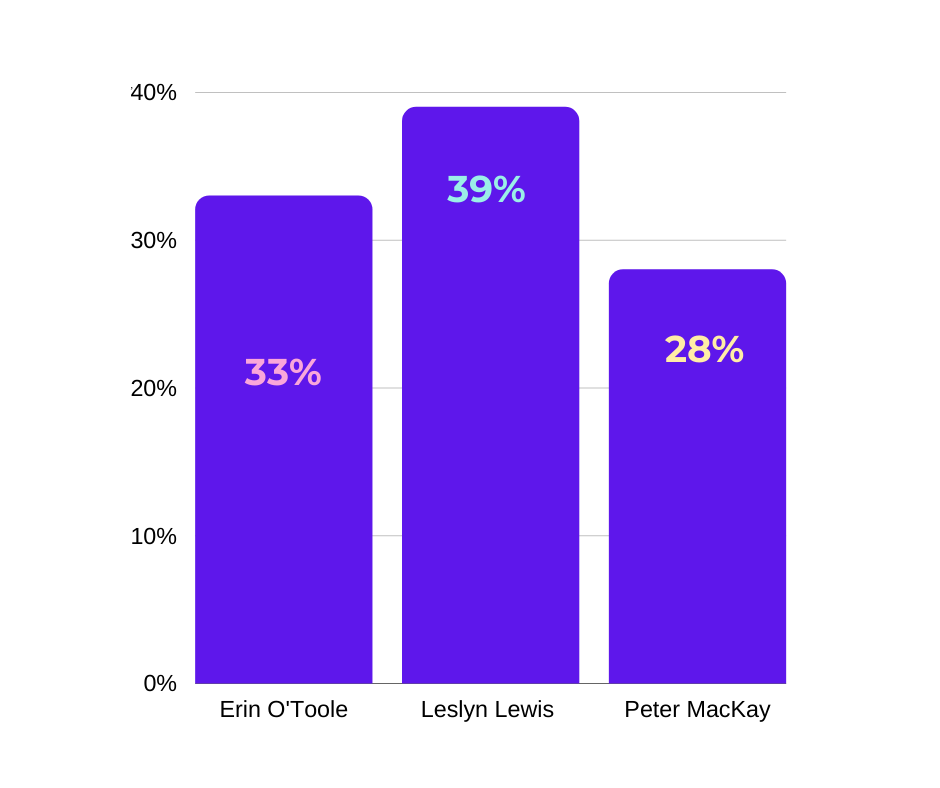 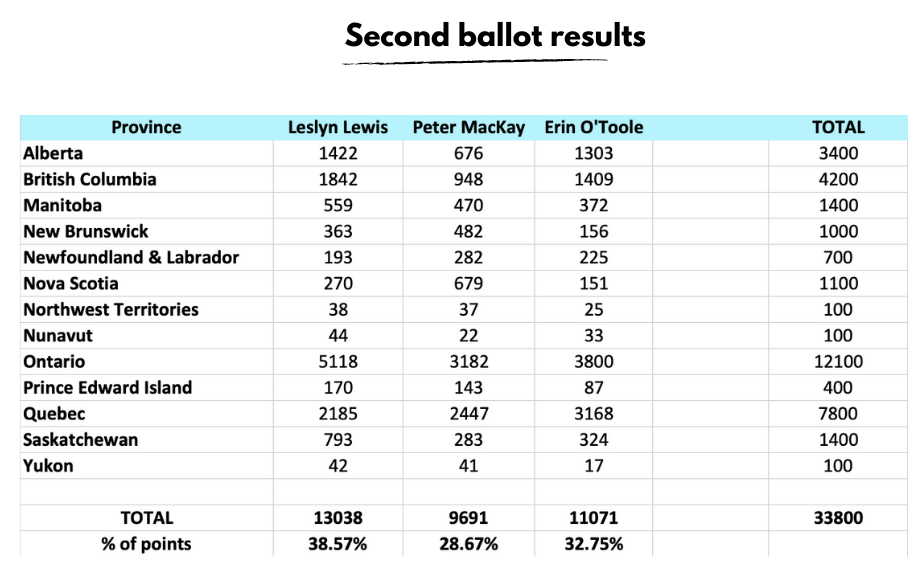 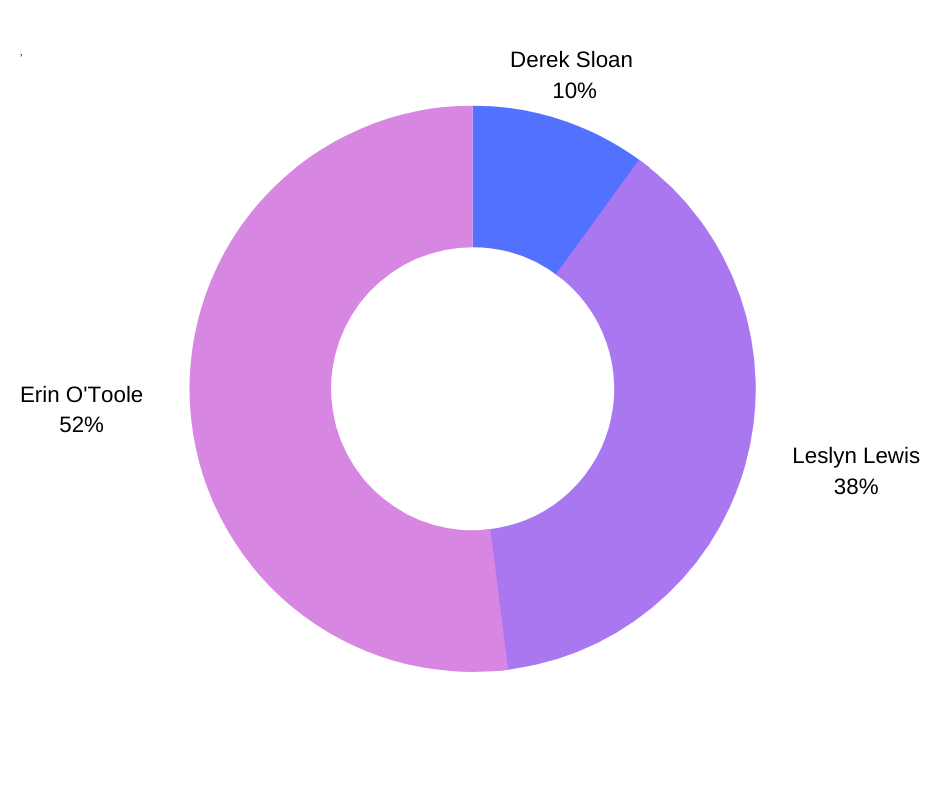 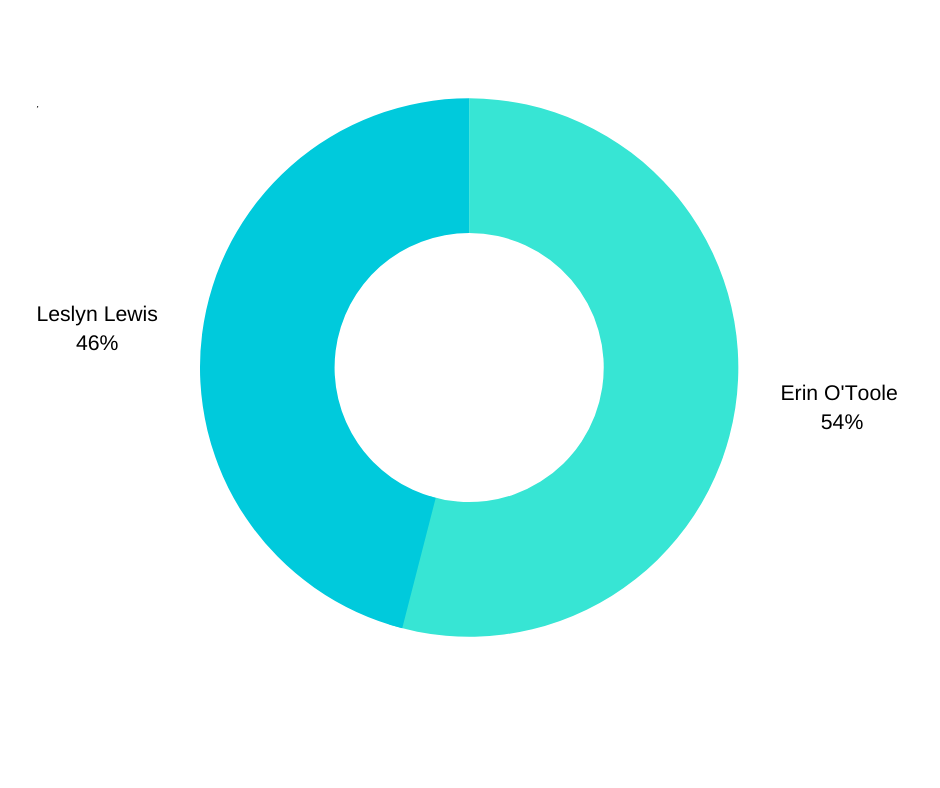 Redistributing the second place points for MacKay in each province and territory, the third and final ballot would look like the following: 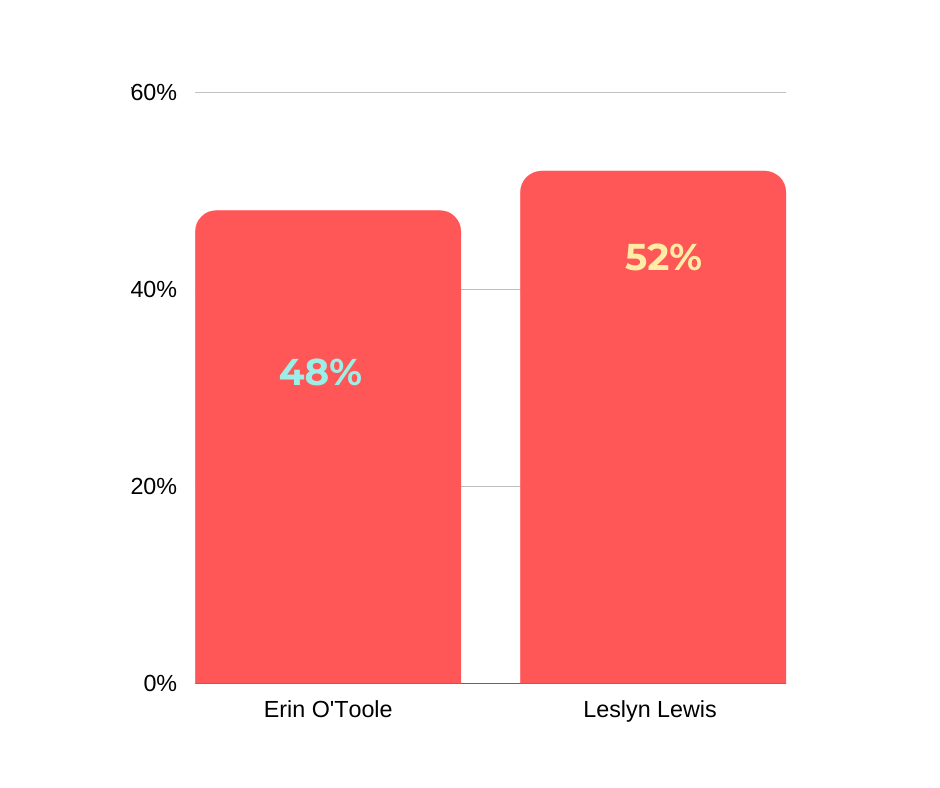 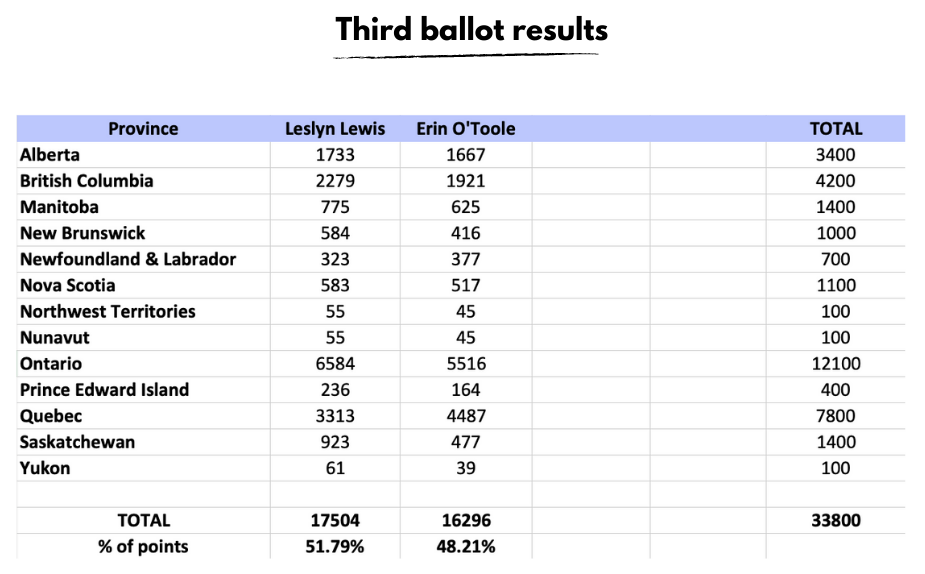 According to the model created and utilizing the donor data available from Elections Canada for 2020 Q2, Leslyn Lewis would win the leadership on the final ballot by a slim margin.

What are the disadvantages of the model?

While the model and data utilized is likely a very indicative model, it is not a perfect model, nor does it rely on perfect data. Some of the disadvantages of the model include:

Finally, it should be noted that while Maxime Bernier raised more than double the amount of money than Andrew Scheer in the final quarter and overall in the 2017 leadership race, he still lost by a slim margin to Andrew Scheer on the final ballot. However, with twelve other candidates on the ballot (including Kevin O’Leary, technically), there was more than enough room for Scheer to gain second place votes with each subsequent ballot. For the current leadership race, that will not be the case as there will only be three ballots, at most. This is also another reason why we have tracked donors and not donations in our model.

What are the advantages of the model?

Most national polls only utilize about 1,500—4,500 responses in their sample sizes within their polling methodologies for approximately 27-million eligible federal voters (although those sample sizes would be far more statistically representative of the voting electorate). Considering that there are just over 269,000 members of the Conservative Party of Canada who can vote in the leadership race, the 25,000 unique individual donors becomes a very large (roughly 10%) and likely predictive sample size of how the members will vote in the leadership race.

Furthermore, the data utilized for this model comes from Elections Canada (a free and public source of information available to all campaigns) and thus does not have an inherent bias that may exist with other forms of data. Furthermore, it is likely that the number of donors from different regions of the country is proportionately close with the number of eligible voting members from the same regions. For example, there are 825 individual donors from Quebec out of 25,046 total individual donors which is 3.29%. This is a small sample size for Quebec since the population of Quebec is just over 20% of the national population. However, the total membership of Quebec for the Conservative Party of Canada is approximately 5%, so this model utilizes a sample size that is far more in proportion to the membership levels of the Conservative Party of Canada in various areas of the country.

The advantage of the data utilized in this model compared to social media statistics is that it is likely far more closely restricted to actual members of the party within its sample size.

Finally, unlike polling data from public polling firms, it does not utilize data that is either old (re: old membership or donor lists that polling firms have attained over the years) and likely relies more on actual members of the party as opposed to those who say that they intend or likely intend to vote Conservative (the party had over 6.2-million ballots cast for its candidates in the 2019 federal election and only 269,000— or 4.3%—of Conservative voters are members of the party).

For all these reasons, donor data is probably the most accurate source of information, numerically and statistically, that can predict who will win the leadership race that is publicly available.

What can you do?

While the model predicts a very narrow margin of victory for Leslyn Lewis, that is far from guaranteed; and while the sample size of 25,000 individual donors is a healthy portion of the likely voters (roughly 17%), there can be incredible variation in ridings with very few members that will have a greater impact in skewering the final results of points.

Pro-lifers can assist the pro-life leadership candidates by sending in their ballots right away if they are a member of the Conservative Party of Canada and to let the pro-life campaigns know they have done so.

The second thing that pro-lifers can do (whether or not they are members of the party) is assist the pro-life campaigns with their Get Out The Vote (GOTV) efforts. You can do so by hosting or helping a ballot drop centre (where supporters drop off their ballots to be mailed), make GOTV phone calls to supporting members for those pro-life candidates, and drive around your neighbourhood to collect ballots of supporting members for those candidates (or all three, if you want to be a rockstar).

Clearly from the donor data the leadership race is a tight three-way race and a few votes being cast one way or the other in a few key ridings can determine who wins and loses. Please consider spending some time over the next two weeks helping out the pro-life leadership candidates to get that final victory.

To help, email us: [email protected]