Since our inception, RightNow has participated in five leadership campaigns for various political parties across Canada. The leadership race for the PC Party of Ontario was by far the strangest and the most intensely engaging one thus far. We’d like to provide a break down of the results of the leadership race and what that means for pro-lifers in the province of Ontario.

How the leader was chosen

The PC Party of Ontario utilizes a voting system that is the same as the federal Conservative Party of Canada and the provincial Liberal Party of British Columbia, a preferential, riding-point system. This means that every member of the party gets to cast a ballot to vote for the leader (at this point, we’ll put aside the fact that thousands of PC Party of Ontario members were not able to cast a ballot due to mishandling of the election process by the party).

On that ballot, each member gets to rank their choices of leader (in this case, one through four). The ballots in each riding are then counted and points are allocated to each candidate based on the percentage of votes earned. For example, let’s say in the riding of Durham, 200 ballots were cast and 100 ballots ranked Christine Elliot as first, 50 ranked Doug Ford first, 30 ranked Tanya Granic Allen as first, and the remaining 20 ranked Caroline Mulroney as first. In this case, Christine Elliot would be allocated 50 points, Doug Ford 25, Tanya Granic Allen 15, and Caroline Mulroney 10.

This process is done for all 124 provincial ridings across Ontario. If no candidate gets 50% + 1 of the 12,400 available points, then the candidate who received the least amount of points is dropped and those ballots’ number two’s are allocated to the other candidates accordingly. The points are then calculated again and the process repeats itself until one candidate gets 50% + 1 of the 12,400 available points.

Now that you’re an expert on the leadership voting system, we can get into some of the numbers.

On the first ballot, 64,043 members voted. The results were as follows: 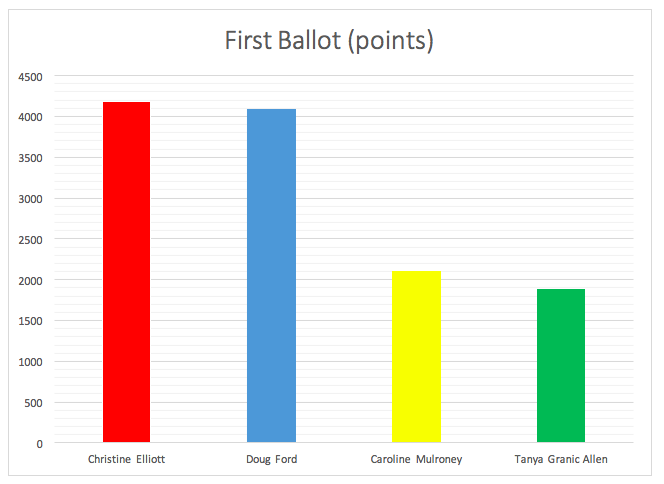 This meant that Tanya would be dropped from the ballot and her points would be reallocated. Here is what happened on the second ballot: 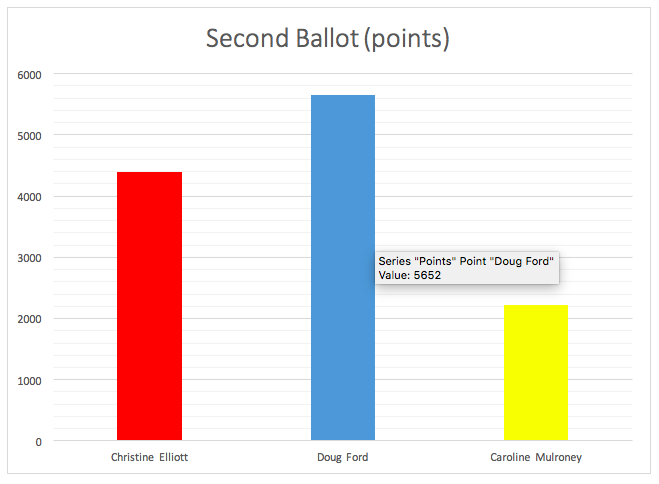 Here is the breakdown of the redistribution of Tanya Granic Allen’s points on the second ballot: 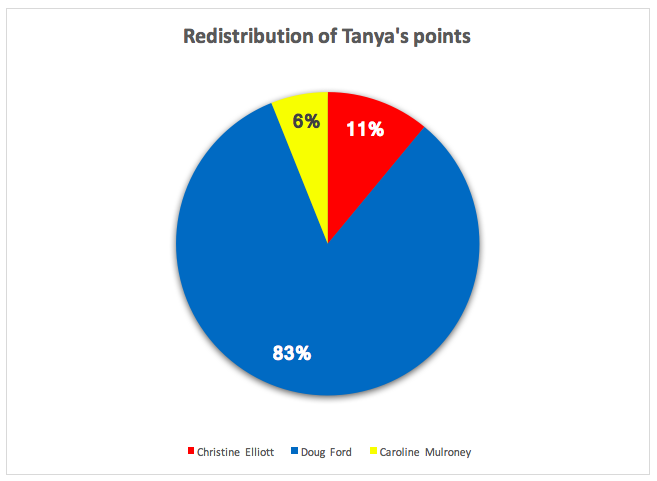 As one can clearly see above, the vast majority of Tanya’s second choice votes went to Doug Ford. This helped Doug surge ahead of Christine Elliott on the second ballot. Now it all came down to the third and final ballot and where Caroline Mulroney’s votes would go. Eventually, the third ballot produced the following results: 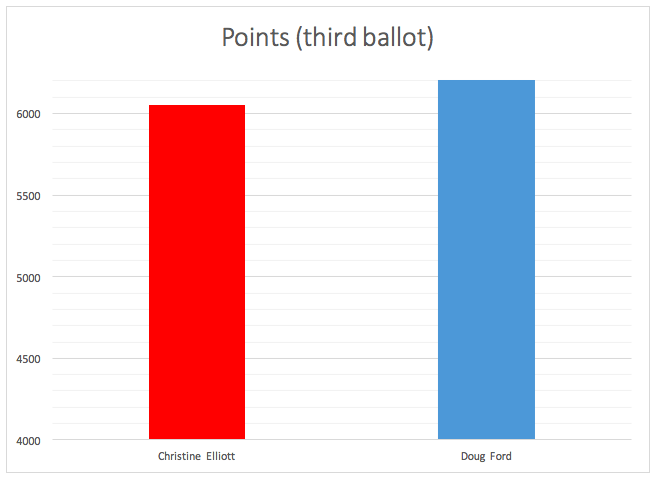 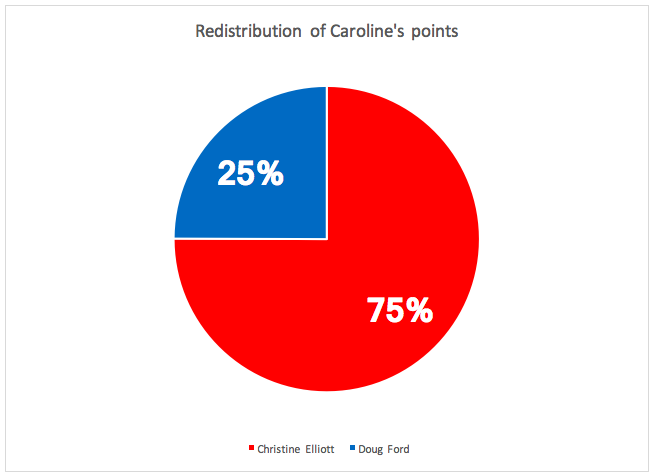 Why it's important to rank your ballot

Now, let’s look at some what ifs.

On the first ballot, there were 9,344 votes cast for Tanya Granic Allen. On the second ballot, 8,846 votes were reallocated to the three remaining candidates, meaning that 498 people who voted Tanya on the first ballot did not rank any other candidate on their ballot. Another way to look at it, is that 5.33% of those who ranked Tanya first did not rank anyone else on their ballot.

Given that 64,043 people cast votes on the first ballot and that there are 12,400 points allocated, that means each vote was worth (roughly) 0.19 points. Those 498 votes represented 98 points not allocated to any other candidate. As we know, Doug beat Christine by 153 points on the final ballot to win the leadership. If another 777 people who ranked Tanya as first and not anyone else on their ballot, then Christine would have won.

Conversely, on the first ballot, 11,099 people ranked Caroline Mulroney as their first choice for leader. However, on the third and final ballot after Caroline was dropped off, only 10,293 votes were reallocated to the two remaining candidates, meaning that 806 people (or 7.26%) who ranked Caroline as their number one choice did not rank either of the two remaining candidates (Doug or Christine) on their ballot. These 806 voters represented (roughly) 158 points.

So who won the leadership race for Doug Ford? 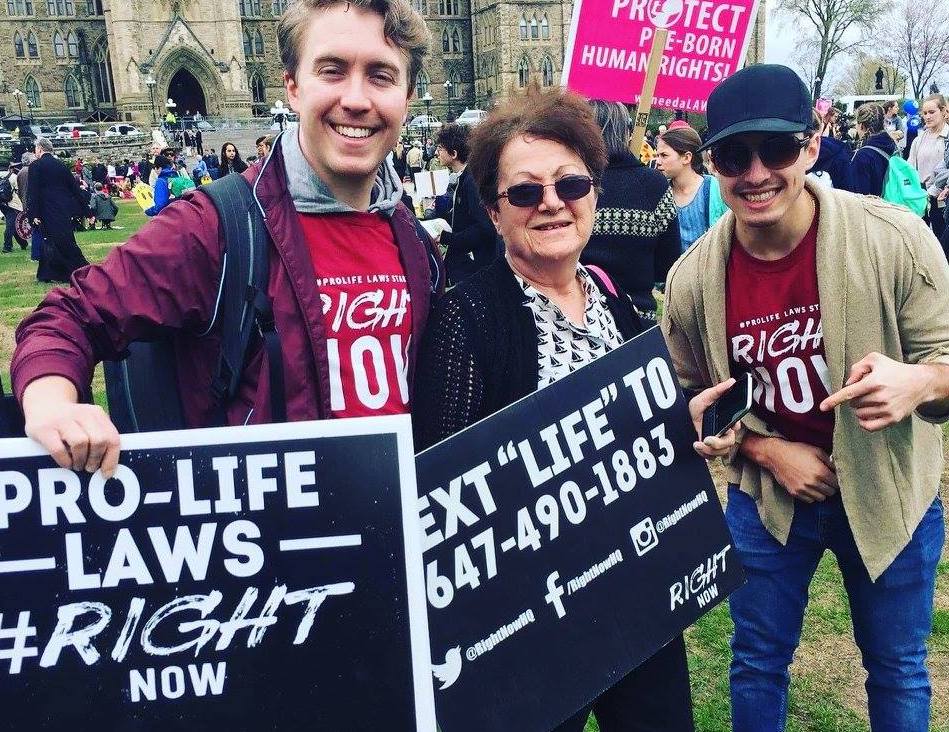 First, what is a red Tory? The term comes from those who lean more toward the liberal end of the political spectrum (thus the red part) but remain within conservative parties (thus the Tory part, as Tory is a nickname for conservative parties). Caroline Mulroney made it very clear during the leadership debate that she was not in favour of addressing the lack of abortion regulations or the lack of legal protection for health care professionals asked to engage in euthanasia whatsoever. This placed her and her voting base toward the Red Tory wing of the PC Party of Ontario.

Secondly, why were both pro-lifers and Red Tories a contributing factor to Doug Ford’s win?

Doug needed 25% of Caroline Mulroney’s redistributed points on the third ballot to win. However, more importantly, he needed a lot of Caroline’s voters to not fill out their ranked ballot. As we know, over 7% of Caroline’s vote did just as much, helping secure the leadership for Doug Ford. 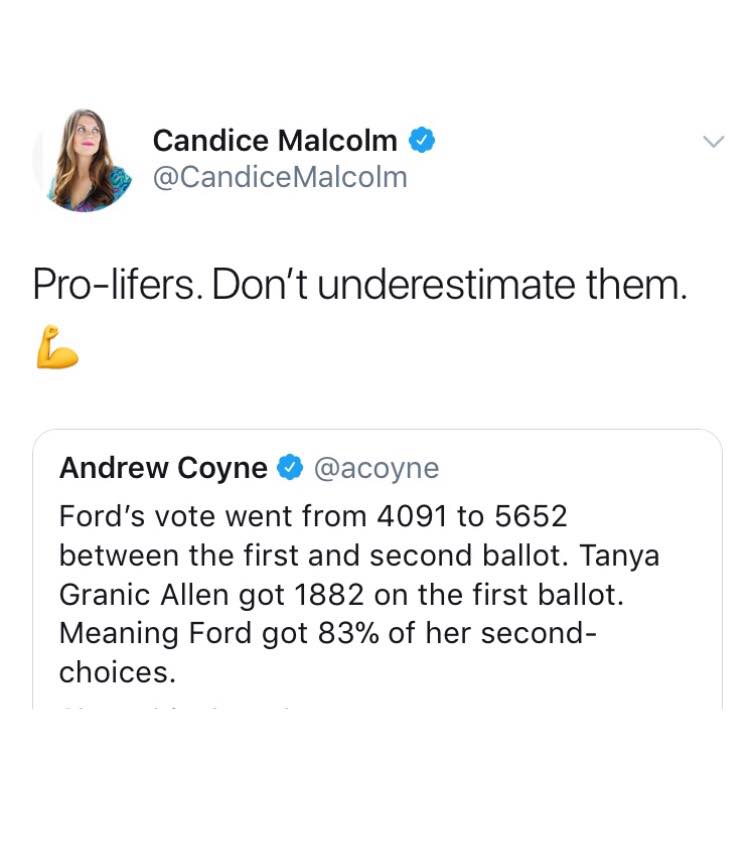 There are many reasons why a candidate wins, and a lot of moving parts. However, when pro-lifers get involved in the political process in a strategic way and effective way, we win as a movement every single time.

The leadership race for the PC Party of Ontario was no different.

What does this all mean?

Well, on the final ballot, 62,243 members cast a ballot. Given the 12,400 points available, that means (roughly) each vote was worth 0.2 points. Since Doug Ford beat Christine Elliott by 153 points on the final ballot, that means he defeated her by roughly 768 votes. Since we know that RightNow was able to get at least 800 supporters through the entire process to vote, we know that it is because of you, pro-life voters, that Doug Ford was able to win the leadership race.

However, we did more than just sell memberships to our RightNow supporters and guide them through the voting process.

We spoke with three of the four leadership candidates to find out what their positions were on abortion and euthanasia. Since the leadership selection process is through a ranked ballot, we wanted to provide pro-lifers across Ontario a recommended ranked ballot based on all the first- and second-hand information we could gather.

Through this process, it was first on our RightNow website that Doug Ford said that he would be open to parental notification legislation for minors seeking an abortion.

When asked about it by a CBC reporter in Windsor a few days after our recommended ranked ballot was released, he doubled down:

We were able to move the window of discussion on abortion legislation and regulation in this province through our interview and the efforts of you, our RightNow supporters. 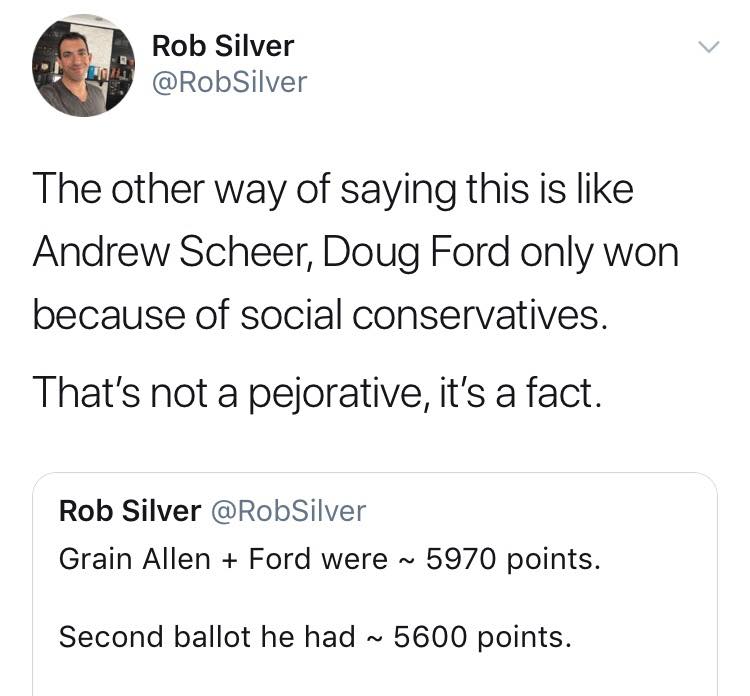 This is another important win for the pro-life movement in Canada. We now have a leader of a major political party in Ontario who, not only will allow free votes for all caucus members on matters of conscience (a massive change from Patrick Brown), but also is open to and welcomes the discussion on abortion regulations and legislation in Ontario.

Doug Ford would not have won without the support of pro-lifers. It is only through the engagement of pro-lifers across Ontario did we, as a movement, secure such an important win. It is only by pro-lifers filling out their ranked ballots (and Red Tories not) did Doug Ford win the leadership.

If you paid a membership fee to vote in this leadership but did not receive your verification or ballot-email, please do not fret. We know, and we understand your frustration, but please know that this leadership voting process was an aberration. There have been multiple leadership races in Canada over the last two years (Conservative Party of Canada, the federal NDP, Liberal Party of British Columbia, United Conservative Party of Alberta, the Saskatchewan Party, and the NDP of Saskatchewan) and all have been carried out without the difficulties of this particular leadership race.

Pro-lifers are winning across Canada.

Now is the time to get even more involved and bring other pro-lifers into the political fold so that we can not only guarantee pro-life premiers and a pro-life prime minister, but deliver them pro-life majorities in those legislatures so that we can finally pass pro-life legislation that protects women and their unborn children.

Get ready We Need A Law; you’re about to become very busy!