Often times, prior to an operation on your body, your doctor and medical team will review the operation with you. They will inform you of how the procedure works, what will be done to your body, and frequently review any x-ray or MRI scans of the area of your body on which they will operate.

If we are to treat the procurement of abortion as any regular medical procedure, then these steps should also be taken. Ultrasound laws are important for women’s health. Every other facet of medicine requires patients be better informed about the health decisions they make. If we agree that women are smart enough to make their own decisions, why are we not giving them all the facts first? Not to mention ultrasound technology reveals if a woman has an ectopic pregnancy which is important, because if she ingests the increasingly popular chemical abortion regiment available in Canada and has an unknown ectopic pregnancy, she has placed herself in an extremely dangerous situation. Ultrasound laws are smart, safe and necessary for women’s health.

What does this mean?

If every province instituted such a law, abortions could potentially decrease up to 25.4% across Canada, or by over 25,000 every single year.

Parental consent is require for school field trips, the ability to join a club sports team and often times even for indoor tanning salons; but across Canada there are no requirements for parental consent in any province.

While the latest abortion numbers are still being kept from the public by most of Canada’s largest provinces, studies show that over 16,000 teenage girls get an abortion every year in Canada.

An abortion is a very serious decision. It ends the life of the child in the womb and can cause deep psychological and health effects on a young woman for years. In order to best help their daughters, parents and legal guardians of minor females seeking an abortion should be required to give consent for the abortion to be performed.

Statistics also show that in the United States, parental consent laws have decreased abortion numbers by upwards of 42%. Even if only half of minor females in Canada are not granted parental consent for their requested abortions, over 8,000 babies could be saved every year.

GIVE PARENTS A SAY!

One of the most common things that women who suffer from abortion years after the procedure say is I didn’t know that abortion did that! By the time women realize the psychological and physical side effects of abortion, it’s too late.

One piece of common ground that those who are pro-life can share with those who are truly pro-choice is ensuring that the woman requesting an abortion is making an informed choice.

The psychological effects of abortion on women years later are traumatic and serious, including:

In fact, according to a study published in the British Journal of Psychiatry, women who have had one or more abortion suffered an 81% greater risk of mental health problems than woman who did not.

The physical effects of an abortion on a woman years later are equally problematic and pervasive and include:

Woman should have the right to be fully informed of the psychological and physical effects of abortion, both in the short- and long-term.

GIVE WOMEN THE RIGHT TO KNOW!

Each provincial health care plan has a list of medically necessary services. Currently, each province lists abortion as a medically necessary service. With the advancement of medical science and fetology, there are very few medical reasons to procure an abortion. Below, the Guttmacher Institute shows that the majority of abortions are done because of personal preference than medical necessity. 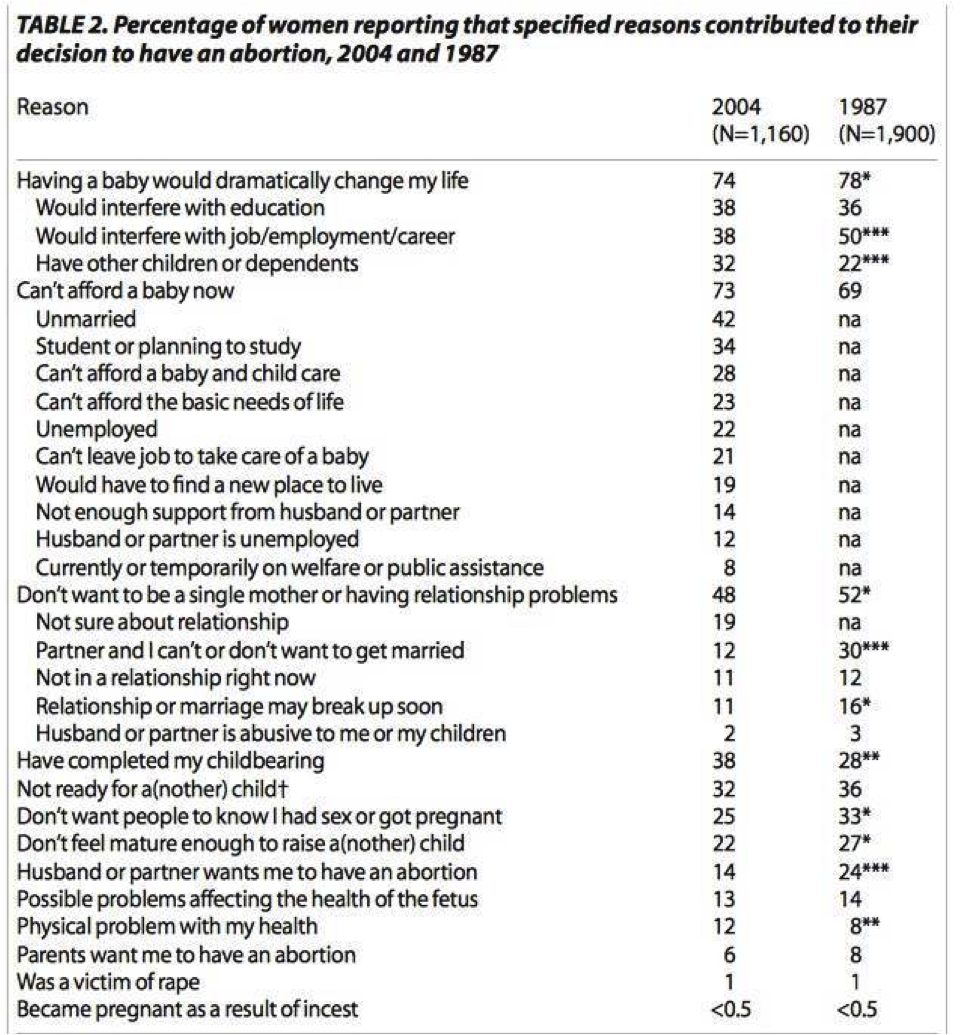 Using the most recent statistics that are publicly available, there are approximately 100,000 abortions procured in Canada every year. It costs approximately $1,000for an abortion procedure. Combining these numbers, abortions cost $100-million every year to Canadian taxpayers.

Instead of funding abortions, our medical care systems could: